Carlisle was a good choice for a rest day. Not only did I luck into a nice hostel, but there was also a bathtub in one of the bathrooms, which allowed me to find that annoying leak in my mattress pad – fixed it and it should be OK now. The hostel seemed to be a stopping off point for cyclists who are riding end to end (Lands End to John O’ Groats) and Coast to Coast. I had some good conversations with a few of these travellers who, amongst other things, asked me if I was end to end or coast to coast – “neither,” I said, “I’m round and about!”

I caught up on some much needed sleep too, but still managed to see many of the sights of Carlisle yesterday – the castle has much history, namely Mary Queen of Scots, Bonnie Prince Charlie and William Wallace were some of the “guests” there at one time or other. 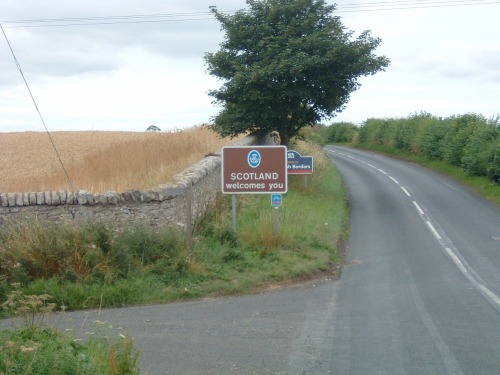 Today I was refreshed and even though I had a headwind, I made good time to my destination of Castle Douglas where I’m camped on the shores of Carlingwark Loch – Aye lads and lassies, I’m in bonnie Scotland. The ride out to here was very pleasant, with much bucolic and pastoral scenery on very quiet roads. The weather has cooled off a bit and the breeze off the Solway Firth helped to keep me at a reasonable temperature.
Second breaky was in Annan and a wonderful country pub (late) lunch in the small village of Haugh of Urr.

Here’s something… The Brits drive on the left, but their toilet tank flush handles are on the (when viewed facing the bowl) right – opposite to North American tanks, weird eh!

Adam K. & (I have to listen to this nonsense all day) Basil.

A much cooler day this morning after a rain shower during the night. Today was the first day that I needed a windbreaker for a couple of hours until I warmed up. 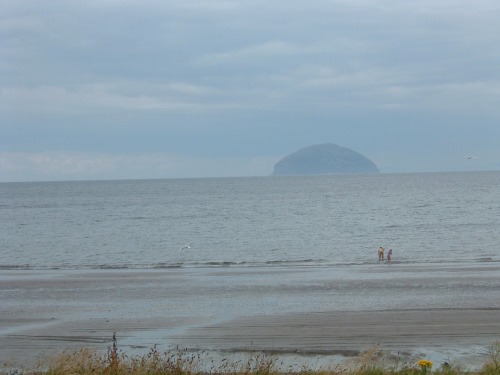 Ailsa Craig in the Mist

I chose a main road, the A75, for the first half of my ride and, as I thought, being Sunday it was very quiet. Also with it being a main road, I happened upon a nice tea room for second breaky. After Newton Stewart, even though I took a smaller “A” road, it was still very quiet riding all the way to Girvan, here on the coast of the Irish Sea. Girvan of course is famous for its proximity to Ailsa Craig – somewhat of a Scottish “Ayers Rock” – just offshore. Seabird colonies galore live and breed on this massive steep-sided rock outcrop.

Last night I met up with a Dutch couple who have also been cycling around various places in Scotland – Funnily enough, I passed them enroute and they just happened to end up at the same campsite as I was – not difficult though as there was only one campsite in the area! They were flying back to Holland in a couple of days from Prestwick – they mentioned how they had spent twice their budget here. Not surprising, money is going through my fingers like water here – many items are much more expensive than at home in Canada. One pound seems to buy what one dollar will in Canada – and at today’s rate that is about double. I met a couple from Texas at the tourist info place in Newton Stewart – they were cycling, but not camping. They said that they were too old to pack all the gear along, but anyway they also stated how pricey almost everything is here too – so it’s not just my impression. FYI, petrol (gasoline) is approximately one pound per litre! Beer’s cheaper though, so all is not lost!

So far, Scottish scenery varies from pastoral hill country to small wooded areas – some areas remind me of NZ, some of the Gulf Islands and other areas of BC. I haven’t seen anything spectacular yet, but some of the villages that I have passed though definitely have some history – even the odd castle or two to please the eye.

Camping in the UK is nothing spectacular, basically you rent a piece of dirt and that’s it – no picnic table or other amenities. Most campgrounds seem to have shower facilities though and usually the showers are free. Not too much in the way of rules either, quiet time is whenever people decide to put their noisy brats to bed – last night kids were still yelling and screaming at 11:00 p.m.! Anyway, that’s some impressions so far.

I’ve decided not to venture up to John O Groats, but will probably head north east from Fort William along Loch Ness – Basil wants to see Nessie! Then I’ll head south from the Inverness area – that’s the plan for now, anyway.

I tried for a hotel and soft bed last night, but everything was full – the Senior British Open Golf Tournament is being played in the area’s coastal golf courses – Turnberry is the venue for the finals, while other courses are scheduled to hold play-off games. Needles to say, lodgings up and down this coast are at a premium, if one could even find a vacancy. I did luck into finding a campground in the town though – not the best, but beggars can’t be choosers. 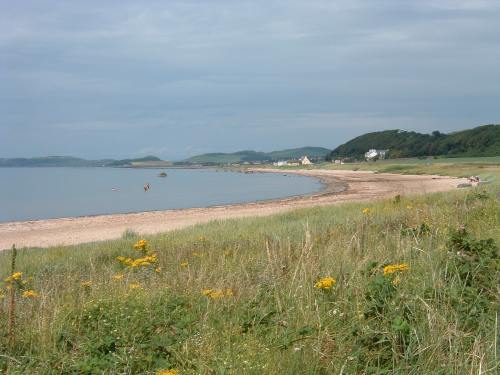 So rode up to Ayr (made famous by Robbie Burns) this morning and stopped for a second breaky. I thought that I’d phone ahead to my destination of Largs for a hostel room/bed – nothing! Everything I tried was booked up and no campground according to my literature. I eventually found a B&B with a double room that was fairly reasonable – so I booked that. The owner said that he would only hold it until 3:00 p.m., so I rode like hell to make sure that I snagged the room. I made it OK, even with some major road works that I encountered – pissed me off more like!

Once I got to Largs I figured out why it’s so busy here – besides the golf tourney down the road. Largs is a small seaside town very popular with tourists and locals. One of the ferries to the Islands leaves from Largs too. Anyhow, I booked ahead to a hostel tomorrow night, so digs should be no problem – all I’ve got to do is ride there! Oh, and catch a ferry to Dunoon.

Today’s ride was one of the better ones – a bonnie wee ride, as they say here, I chose the coastal route, and wasn’t disappointed with some good views out to sea and along the shore. Even rode beside some sand beaches that looked very inviting. The only glitch was riding north from Ayr, I had to pass by the vicinity of Prestwick Airport – you can imagine how busy the roads were in that area. Another minor problem was finding my way around Ayr – what a quagmire of streets – the city engineers who devised that mess should have been shot – maybe they were! Anyway, just a mess of streets and alleys intertwining into a maze. Good for keeping tourists around though – some have probably been wandering around for weeks trying to find an exit!

All in all, not a bad day, weather was cloudy/sunny – looks like the heat wave has left though – this area anyway. I’ve found a nice pub for a late lunch of Scottish Haddock, some typing and a pint – or two – of McEwans – life’s good! I’m also pleased that there is a “No Smoking” policy in Scottish pubs too!