Yesterday’s ride was good, today’s was even better. After a hearty Scottish breakfast at the B&B, I had a 25 km ride to the ferry at Gourock which would take me across the Firth of Clyde to Dunoon. From the town of Largs I was riding along the coast all the way with some great views to enjoy. 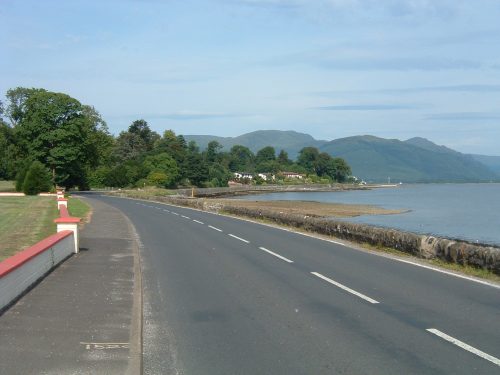 Once across, I was on even quieter roads with perfect vistas while riding beside Holy Loch, then Loch Eck and finally Loch Fyne all the way to Inveraray. I even found a nice cafe for second breaky at Hunter’s Quay just north of Dunoon. So a very enjoyable day with good weather and light traffic – until I fell of my bike! Stupid too, I saw it coming – I just pulled into a parking area off the road and saw some loose gravel ahead, instead of stopping I tried to ride through it. With an empty bike it would have been easy, but with 50 lbs on it, different story! – I stopped dead and just couldn’t release my foot in time – over I went! No big deal, Basil’s fine, bike’s fine, no damage at all. And I just banged and scraped my elbow and knee a bit, so they will be sore for a while – I seem to favour that elbow for leaning on when in the pubs too! I’ll have to be more careful in future! 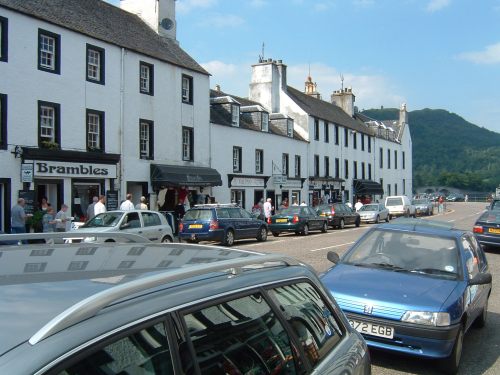 I’ve got a hostel tonight and the weather people are predicting storms for the next couple of days, so I’m trying to book ahead as much as plans allow – so far, so good. Apparently the heat wave is back in Southern England – I feel sorry for all the Brits, and can’t complain at the pleasant temperatures here in the north when they are stifling in the South. A little muggy here, but the predicted storms should freshen things up – hopefully they happen during the night, not when I’m on the road.

Hostel registration doesn’t open until 5:00 p.m., so a late pub (built in 1776) lunch again while I type up this report. I’ll wander around town too and see some of the sights – woollen mill, old jail and a castle amongst other things – another little touristy village, but quite small really. The castle is the home of the Duke & Duchess of Argyll – whomever they may be! 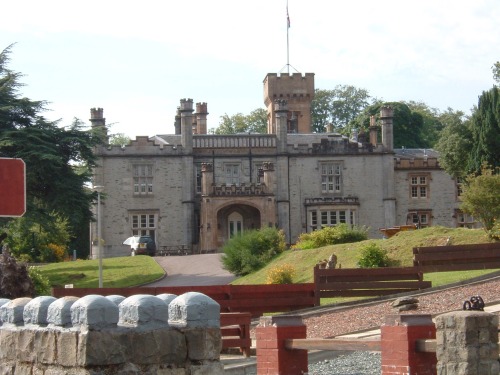 Castle of the Duke and Duchess of Argyll

Off to Oban on the coast in the morning. After today’s gentle hills, I see a big one just up the road from the hostel – better have big breaky before I tackle that one!

Adam K. & (I need a helmet too after that spill today) Basil.

A short day of riding and a fairly pleasant one too with some good views and fair weather. Not too much to complain about with the roads, they are mostly in good condition and traffic is light to moderate – and courteous to cyclists, I might add!

It rained a little last night, but no thunderstorms and it doesn’t seem as if they will happen in this area. It was still very muggy when I left the hostel and I was soon sweating up the morning hill through almost a rain forest area, with no breeze at all.
Last night in the room it was quite claustrophobic and hot, what with two other guys there and a very small window that would not have let fresh air in even if there had been some to let in! All in all, it was a fairly run down hostel with limited facilities. A fellow that was bunking with me and that travels extensively, said that quite a few of the smaller hostels were being let go in the UK, as they were not so much in demand to today’s clientele – more families and couples are using hostels it seems, and demanding better facilities than some of the more rustic ones can provide. The YHA must see more profit in the hostels that have single rooms and ensuites etc. Too bad really, because the concept of hostels has been to provide budget accommodation, not frills. Nevertheless, the one last night was not even very clean, only one of two toilets worked etc, etc. Today’s hostel at Oban is a little nicer and on the promenade of this seaside town.

Quite a large town too I was surprised to find. Lots of amenities here and I arrived early enough to do some laundry of stinky bike gear – after a while all my clothes seem to smell alike – I don’t know if that’s a good thing or not, but it sure is nice to have sweet smelling bike gloves – at least for a couple of hours anyway. On the way here I stopped at the Cruachan Hydro Power plant, I got a free tour because I cycled in – green tourism promotes free visits to various places of interest if one cycles or buses to the venue – good deal eh? Worst thing was my camera batteries just died as I was taking my first photo there – and that Basil packed some dud batteries for spares – what a dummy – he’s sleeping out in the bike shed for that stunt!

Anyhow, I missed some other great photo ops on the way too, but I did manage one shot at the Pass of Brander. I managed to get some batteries right away in Oban – not cheap, but one has to pay the going rate!

Nice sun here on the coast opposite the Isle of Mull and there’s a fresh breeze off the water so sleep should be easier than last night’s sweatbox.
The distillery here is famous for its single malt, so I should venture there for an aperitif before retiring for the evening!

I woke up to a cool and very misty morning – the Isle of Mull across the bay brought forth a typical image of West Coast Scotland. But the Scotch mist soon started lifting and I had a pleasant temperature for my ride to Fort William. By the time I reached Fort William, the sun was out.

A short ride again, but it’s working out that I can do more exploring if I arrive at a destination a little earlier. Besides, it’s nice to meander for miles and miles and not worry too much about “having” to put in mega miles to the next pit-stop! Yesterday and today, the hostels let me check in early, clean up and lock up my bike which allowed me to wander around quite unencumbered. 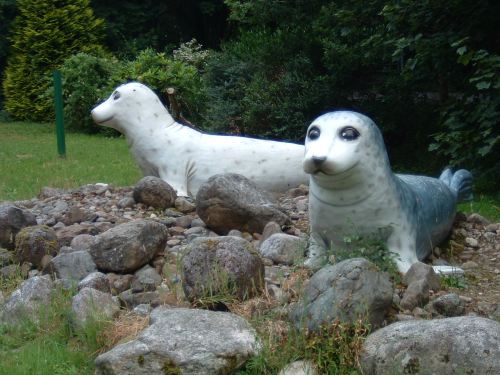 A great ride again today, more coastal riding beside Loch Linnhe for the most part. Many of the Lochs that I have ridden by are salt water and today I passed a seal sanctuary on Loch Linnhe – it was closed until 10:00 a.m., but they rescue seal cubs from various mishaps – I was kind of fortunate that it was closed, had they asked where I was from – Canada – they would have probably said, “Oh, you’re the guys who club them to death!” Anyway as I said, a good ride with only two or three short steep hills to ride. 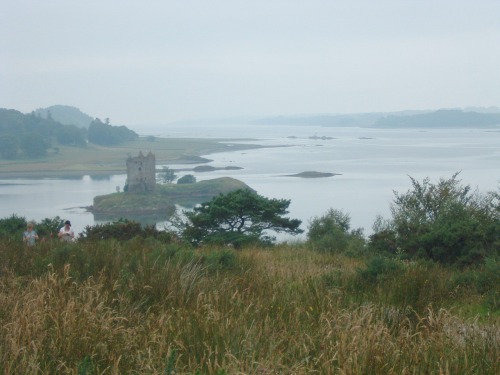 Castle in the Mist

The last challenge was getting to the hostel from the town of Fort William. One long steep killer hill left me breathless by the time I found the place – when I phoned ahead the lady had said, “up a hill.” When I arrived, I told her that it was more than “just up a hill” – she said she didn’t want to frighten people away by saying “VERY STEEP HILL!” At least I get to go down it in the morning.

By the way, I officially rode into the Highlands at some point today – approximately midway between Oban and Fort William. Fort William is the gateway to Glen Nevis and Ben Nevis – the highest peak in the UK and a favourite place for walkers, hikers and climbers from all over the UK and Europe. Busy place, with lots of outdoor shops and other places for tourists to empty their pockets. Oban, where I was last night, is also a favourite haunt for hikers/walkers to access the Isle of Mull by ferry. The hostel was full of them last night all “mulling” over what route to take – get it – “mulling” – ha-ha!
I’ve also seen and met quite a few cyclists at the hostels – they tell me that I’m lucky to be living in BC as many of them would love to cycle-tour there, if they could. So I get quizzed a lot, at least it makes for some interesting conversations with people of similar interests.

Light rain started just after I left the hostel this morning and soon changed to heavier rain. So lots of stops in tea rooms along the way to dry out occasionally. Second breaky was in Spean Bridge at the junction of the A82 and A86.

Fortunately, the rain subsided after lunch and the sun kept trying to peer out from behind the clouds. Roadwise it was a nice enough ride with enough hills to keep the heart rate up. The rain and mist marred some of the scenery and I couldn’t even see the peak of Ben Nevis for a decent photo. Once we began riding close to Loch Ness, Basil was busy rubbernecking trying to get a peek at Nessie – no luck though, Nessie is still a mystery. Maybe we’ll have better luck in the morning when we pass by the remainder of the loch. 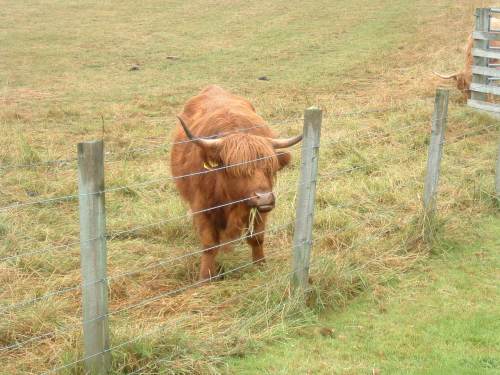 I’m staying at a backpacker lodge/hostel tonight – only place around here other than expensive B&B’s. There are three “official” monster exhibitions here – a veritable tourist trap. Interesting reading though about all the research that has been ongoing for many decades. I’m sitting in a pub that has micro brewed ales and won some awards a couple of years ago – anyway, the beer that I’m sampling is made from oats – damn, these Scotsmen are smart, they use porridge in everything! 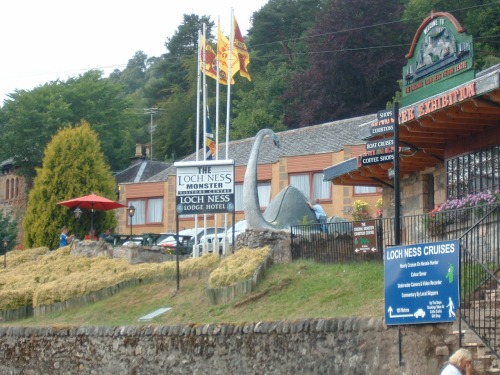 I’m getting confused with all the lochs etc. that I’m passing, so excuse me if I don’t mention all the names of the lochs, villages, glens & bens, but suffice to say that they are abundant. I can really see how Canada has great links to the many Scottish emigrants who ventured out to Canada to engineer the railroads and start many of the major enterprises that helped develop the country. So many names here are synonymous with places and people in Canada – lots of history to digest! I’ve managed to miss a few Highland Games at various venues, whether that’s good or bad, I don’t know, but I’m certainly getting a good sampling of life in Scotland regardless.

Tomorrow for a short while, I’ll be heading north-east to Inverness, then I’ll turn south to ride through the Cairngorm and Grampian Mountains for a couple of days. I’ve booked a hostel in Edinburgh for two nights next week, so that’s where I’m heading and it will be my next rest stop – I’ll be ready for it too. Although I’m not riding great distances, I’m finding the riding tiring – much of that is not hills etc., but rather the constant attention to traffic to see what’s coming up close to me on these narrow, sometimes very busy roads, which in general have no shoulder to ride on.
Well, I’m hoping for better weather tomorrow, but it seems very changeable right now.