Yesterday was a great day off in Lunenburg where I played the proverbial tourist; suffice to say that I packed a lot of sightseeing into a small time frame. Wonderful town; the scenery and architecture of the heritage homes was very worthwhile to see. And yes, I pigged out on more of that boring seafood stuff! Met some very nice people back at the campsite – even a few bike tourists too! I was serenaded by a nice lady who moved into the campsite next to mine – she had just bought a nice new guitar and was experimenting with a few tunes. She was American and had just travelled up to Canada in the last few days. We chatted for a while about our travels and she informed me that she was just going to travel around for a while with her car, tent, dog and guitar. We exchanged email addresses – hers was on a card that read “Elizabeth Pickell” – “Human Bean” – I liked that!

So it was good to get on the bike again this morning. It’s funny how you miss your daily ride, even though I know that it’s good to give the old body a rest every now and then. Nevertheless, I cruised the coastline through many more very scenic villages; it seems that the great scenery just doesn’t stop and even the weather is cooperating – we won’t talk about the wind! I passed many small sand beaches where people were out swimming and sunbathing and generally enjoying the great day.

Then I turned a corner in the road and “Bam,” what a change in the land and seascape. Starting at about 8 kms out from Peggy’s Cove, the shoreline and land is littered with with large and small granite outcrops. The white sand on the beaches that I had passed was replaced by huge boulders that littered the shoreline.
Peggy’s Cove (population 60) is an interesting place. The whole village is kept under a preservation order to prevent development and serve as an example of how a small fishing village looked (and worked) in days of yore. There’s a church that’s being restored and lots of heritage homes scattered on the hillsides around the village. With these huge rocks around here, I can see why a lighthouse was needed at Peggy’s Cove too! Great place, just too many tourists – whoops, I’m one aren’t I? 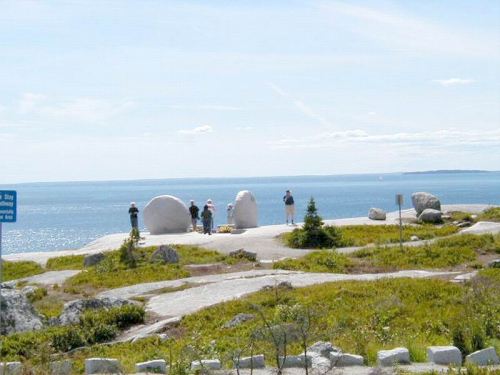 Talking about tourists, there were also quite a few at the Swissair Flight 111 Memorial site, which I visited too. The site is only about one kilometre from the village and a very touching tribute to all the unfortunate victims and families who lost loved ones in the disaster.

I’m camped at Indian Harbour, which is only 3 kms west from Peggy’s Cove. I’ve managed to get an oceanfront site again, my luck sure has been good with the last few campsites that I’ve had. This one is definitely the closest to the water that I’ve had though. If I stepped out 6 feet from the front of my tent, I’d be in the water at high tide. But I’m also about 8 feet above the beach, so there’s no danger of the tide flooding me out tonight – I hope! Mind you, if a storm whips up, Basil’s gonna have to start bailing! 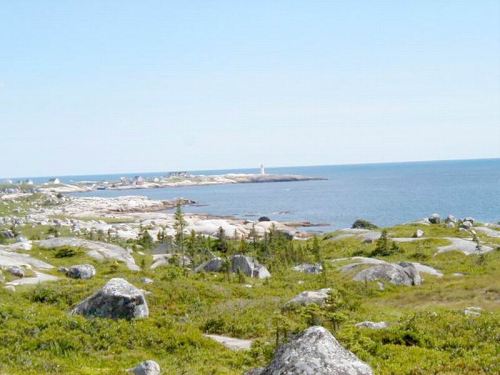 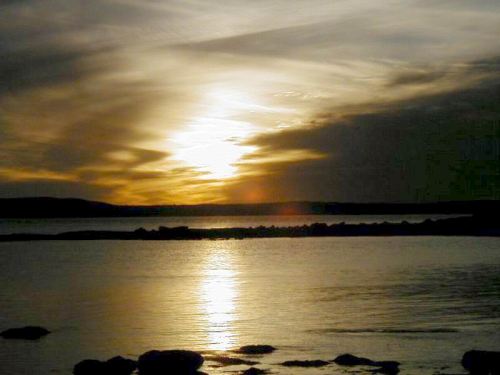 Regardless, it’s nice to have a memorable last campsite for a trip, and this will be my last night of camping for the tour – as I said, hopefully, not too memorable though! I’m just going to watch the sunset, then turn in for the night.

I thought that I only had 40 kms left today, but I’ve been wrong before!
Anyway, here I am, I made it in one piece and what a fantastic voyage that was! My odometer is reading 8,932 kms, so I almost did hit that 9,000 mark! Today’s ride was an anti-climax for me, and the miles ticked over ever so slowly. Whether it’s because I wanted the trip to end or not is unclear – mixed feelings. I do know that I can really relax this long weekend in Halifax and enjoy some sightseeing for two or three days before my flight home on Tuesday. I say “really relax,” because on my other days off, there is always the ride the next day to plan and think about and also I have to worry about leaving my bike and gear if I’m wandering about somewhere. But the bike and gear are safe in the motel room here, which leaves me free to explore as I wish; and no worries as to where I will eat, sleep or drink the next day.

I had about 20 kms of nice scenic riding this morning, then I could tell that I was nearing a larger city the closer that I rode towards Halifax. The stores and houses got closer together, the traffic volume increased and the drivers become arseholes. Why is that? For the most part, out on the open roads away from towns, almost everyone gives me a wide berth and is generally courteous. As soon as I near a city, everyone’s in a hurry (maybe that’s it – impatience and poor time management) and wants to pass me as close as possible, to stand and wait at the next red light – stupid! Anyhow, I can sure tell the difference. Enough already, I’m done!
What I really want to do is gloat, not because my trip is finished, but the fact that I never had one flat tire, and am still riding on the same tires that I left Sidney, BC with – Amazing, talk about “you get what you pay for.” My tires have been excellent and still have lots of tread left on them, well worth the extra cost.

Well I certainly have enjoyed the tour, and I think that even Basil did too! He still can’t believe that we’ll be home soon, but we will be! I have my 200 km BC Lung charity ride to complete on the weekend following my return and that will be fun. Riding an empty bike will be a real treat – wish me luck!

Some Views of Halifax, Nova Scotia… 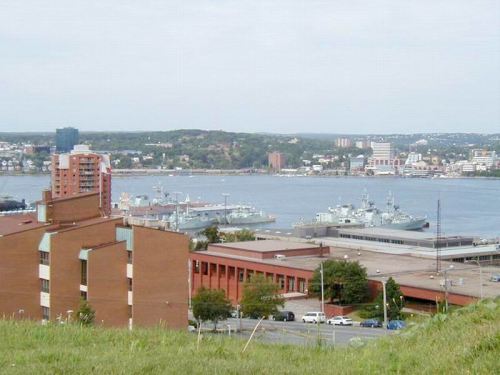 View from the Citadel

Lots of people ask me, “what was the best part of the trip, or the country?” I find that question difficult to answer, as there were so many “best parts of the trip.” And the country? Each Province has its charm and shortcomings, and maybe I’m prejudice because I live here, but British Columbia is very hard to outclass. I think that I stated somewhere in my travelogue that I knew first hand how the moniker “Beautiful British Columbia” came to transpire, and that’s because of the absolutely fantastic scenery that abounds here. Nevertheless, Canada has a diverse and stunning landscape, together with a population that enjoys varied cultures; I was very fortunate to be able to experience all those – from the seat of my bicycle!
I was glad to return home after over 12 weeks of travelling, but it was very difficult to get back into my regular routines for a while. I persevered though and began planning another bike tour almost immediately – well you have to get your priorities straight, don’t you!

The trip took 83 days – 71 days actually riding, 10 rest days and 2 days travelling by ferry (back and forth to Newfoundland).
Average mileage for the riding days = 125.8 kilometres (75.5 miles) per day.
Longest day – 203 kilometres
Shortest day – 48 kilometres
I spent 49 nights camping, 10 nights in hostels and the rest of my accommodations were either in motels or bed & breakfast establishments.
I ate a ton (figuratively speaking) of food, drank a river of Gatorade, ate a mountain of ice-cream and lost about 8 pounds in body weight!