They shouldn’t have been, but they were tough ones today. The road (Highway 1) was great, relatively quiet, lots of stuff to gawk at and few hills. I passed through a myriad of pleasant towns and villages that lined my route. The route basically followed the Annapolis River to its exit at Digby and the Bay of Fundy. Yes, I’m now back into the land of monster tides on the south side of Fundy. So what was tough? – What usually makes it tough? Yes, that sodding headwind thing again! For the first couple of hours today it was OK, then that south-westerly picked up tempo and has been blowing for the rest of the day at 35-50 kms/hr. Really hard work pushing that wind for hour after hour – it’s when you realise how un-aerodynamic your bike is with all that luggage strapped onto it! Basil told me ditch it all, but we need it for a while longer yet!
Anyhow, I made it Smiths Cove Campground, which is 6 kms outside Digby. It’s a nice spot right on the oceanfront and at present getting a generous helping of that wind – believe me, it was a challenge even putting the tent up today!

High and Dry in the Low Tide

It’s neat watching the tide go out here, as it goes out fast and for a long way, leaving all kinds of beach exposed for exploring.
Two more interesting things I saw today…
#1: Was an old wooden roller-coaster at an amusement park in Upper Clements. The rickety looking contraption is still in operation too – and makes all kinds of noise as the cars go clattering by.
#2: Was the tidal hydro generating station at Annapolis Royal – both very neat to see!

Well I promised myself that I would, so I’m going to Digby for some Digby scallops this evening – just what I need, another bike ride into the wind. But it’ll be easy coming back, so long as the sod doesn’t change direction while I feast!
By the way, it’s unlikely that I’d get tailwinds in this area anyway, as the south-westerlies are the prevailing winds here, I just wish that they’d lose some momentum, at least until I reach Cape Sable and start heading east for Halifax!

The westerlies were still blowing this morning, but they changed to north westerly. I travelled south today, so the wind was to my benefit – for a change! It rained on and off all night, but stopped early this morning, which allowed me to pack up my gear without getting soaked. After I started riding, the sun came out and it was very pleasant with the cool breeze behind me.

And what a day for spectacular scenery. The section that I rode from Digby to Yarmouth encompasses the French Acadian shoreline and most of the oceanscapes that I saw today were picture-book perfect. I could see Digby Neck over St. Mary’s Bay, fishing villages, beautiful churches, great beaches, rolling surf and working boatyards all added to the experience – a great day on the tour! I hope the south shore of Nova Scotia is just as appealing – I’ve heard that it is, all I need is for the weather to hold out. Unfortunately, the weatherman is predicting rain starting tomorrow afternoon, let’s hope that he’s wrong! 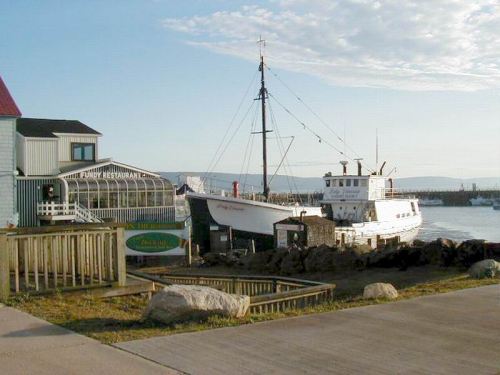 Digby was a nice town and the scallop dinner was even better than expected, certainly worth the ride into there yesterday evening. Amongst other places, I poked around Yarmouth for a while today, quite a busy place tourist-wise, but that’s to be expected with the ferries from the USA arriving there.

My campground is about 7 kms south of Yarmouth and the mozzies here are voracious! Yesterday’s campsite was pretty well mozzie free and I recorded no bites. I arrived here and immediately was bitten about six times. I think that instead of carrying extra water, I’m going to carry a bottle of blood in case I need a refill! I was looking at some citronella patches in the store today and wondered if they worked well for repelling the little horrors? I guess I should have bought them, today would have been a good test for them – excuse me; swat, swat, swat!
Time for dinner, Nova Scotia kippers tonight – Yum, Yum!

More coastal scenery today, but nowhere near as spectacular as yesterday’s. I pedalled through more quaint fishing villages and, for a while this morning, a lot of nondescript countryside/bush areas.
It was a very quiet ride with very few services for many miles (I did find that little country diner for my second breaky after 45 kms riding though – amazing!). I thought that the whole day would evolve the same, but when I reached the causeway for Cape Sable Island, it was like landing on another planet! I turned the corner from a quiet country road to the spectre of McDonald’s, Tim Horton’s, Atlantic Superstore etc., etc. I guessed that this was the place where everyone stocked up with food and supplies before hitting the beaches and cottages of the island. I rode onto the island for a short distance to nose around – and I did see some scenic areas, so I can see why this would be a hot spot for the summer visitors.

Returning to Highway 3, I then rode through some historic towns, Barrington for one, and continued on to my abode for the evening, Shelburne. Shelburne was a Loyalist town and the historic waterfront is being restored to its former glory. What they’ve done so far is very appealing to the eye. Many of the 18th century buildings and houses are already in fine shape and it appears that the other restoration work is ongoing at a feverish pace – impressive! I’m having dinner at one of the restored buildings that is now the Sea Dog Pub – seafood chowder – yes, it’s really good! And so is the beer to wash it down with! 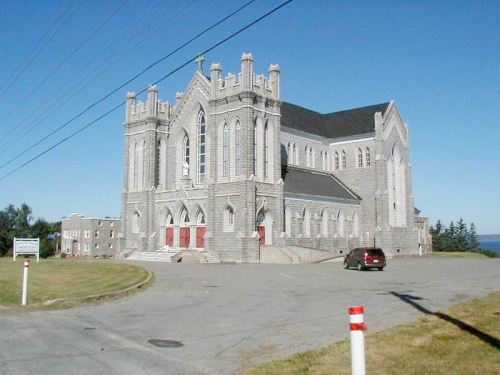 The Acadians were here!

Also today, historic stuff I passed… The first Acadian settlement in Nova Scotia. The black Loyalist settlement. The old woollen mill at Barrington. The site of a UFO landing (not sure about that one), and other stuff that I can’t remember – tons of history on these shores!
It’s funny though, because one town will have a French name, then the next a Scottish name – a real mish-mash of who settled where first. I keep expecting to see something like the town of “St. Jock du Haggis!”

Anyway, motel tonight, there’s a wet weather system rolling in (in fact, it’s just started to rain) and I think that I’ll get wet enough tomorrow on the bike without having to deal with wet camping gear in the morning.

By the way, I turned east today, so did that bloody wind!

Sometimes things never work out as planned, or as someone else said “shit happens!” But sometimes it is for the better…

I had planned a short day today cruising the south shore coastline again and ending up in a reasonably priced (read, cheap) motel in Brooklyn, just past Liverpool. So I did my sightseeing, then dawdled over a second breaky at a nice cafe and ended up at the motel early afternoon. I went to check in; the lady at the desk said that their whole water system was inoperative and that the plumber was nowhere to be found (he was probably in the same beer tent that I went in at Brooklyn’s Sea-Fest on the waterfront!). Anyhow, that left me with a choice of returning to Liverpool or continuing on to camp at Risser’s Beach PP. I hate to go backwards, so I had to ride quite a bit further than planned for the day. The worst part was that the rain started again almost as soon as I left Brooklyn. Just showers though, but they rolled around and around for the whole afternoon. At least it wasn’t like last night’s downpour, as I lay snug and warm in my motel room bed! It was still raining a little when I left Shelburne this morning, but cleared out, just as the weather channel had predicted. I guess that I must have caught up with the system on my ride to Risser’s. It finally is clearing, the sun has come out, but it’s after 6:00 p.m. already. Oh well, perhaps the sun will shine on tomorrow’s ride.

I did see some wonderful white sand beaches and lots of surf crashing onto the rocky shores. In fact, I suppose because of the weather, I managed to snag a beachfront site here at the PP. Sitting here watching and listening to the waves crashing onto the beach makes all today’s problems disappear. The sound reminds me of Hawaii at the beachfront, the waves just never stop; I’m sure that I’ll be lulled to sleep tonight.

I know that winter happens here in Nova Scotia with a vengeance, but for now, what a fantastically scenic place this western and south shore is; I’m glad that I decided to ride here with the extra time that I had accumulated.
Well, for sure, a short ride to Lunenburg tomorrow, and if I can find decent lodgings, I’ll have an extra day there as I’m sure that there is a lot to ooh and aah at!

I met a touring cyclist from Connecticut today. He, Scott, has been on the road for three weeks, and he also commented on the lack of meeting other cyclists on his travels. “They’re out there though,” I told him – remember the banana skins – I gave him a quick lesson in rudimentary banana skin reading – I can just imagine what was going through his head and the stories that he’ll relate to his fellow Americans about the British/Canuck Banana Skin Tracker!

What a slack day! But needed after those few longer days. Tomorrow will be even slacker, as I’m definitely taking a day off here.The weather’s beautiful and there’s a lot to do here. I was hoping to see the Bluenose II, but guess what? She sailed for Shelburne (the place that I was at two days ago!) yesterday for public cruises. Just my luck eh? Oh well, there’s more than one boat here to gawp at!

View from my Tent Flap!

My campground is next to the visitor information centre here. I have a really nice site again, overlooking the entrance to Lunenburg harbour – picture perfect view!
Today’s ride was obviously short, along more of the coastal splendour here and over quiet country roads. More beaches and splendid waterfront properties lined my route. I took the cable ferry across the bay, from Le Have to East Le Have, to save riding into Bridgewater and back out again. Five minute ferry ride, $5.00 for cars, free for bikes – good deal! On the way to Lunenburg, I visited The Ovens Park, where there are sea caves and tidal water spouts – neat stuff! 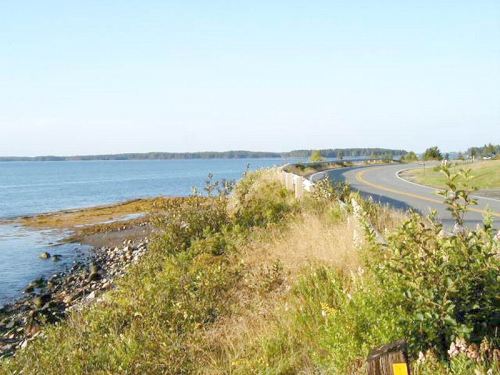 An update from yesterday evening … I decided to go and dip my feet in the ocean after dinner last night. As I walked along the beach, I passed a headland and beyond that there was all kinds of activity going on. Apparently, the Canadian Surf Lifesaving competition had been ongoing all weekend at Risser’s Beach. They had just finished and were just starting to clear up when I saw them. Now that would have been interesting to watch, rain or no rain, too bad that I couldn’t have arrived earlier – and known about it!

FYI (country music fans) – The town of Brooklyn that I passed through yesterday is the home town of Hank Snow.