Riding from Santa Barbara’s suburb of Goleta was actually pleasant even though I had some morning traffic to deal with. But I wasn’t in a hurry and there were nice bike lanes to ride on out of the city with clear skies and bright sunshine. In fact, after leaving Lompoc and arriving at the coast, the weather is perfect, not too hot yet which is good for cycling, but there is a promise of warmer temperatures later in the week.

Not too far out of Santa Barbara I stopped for a snack & coffee at Summerland – a very nice little town with a splendid cafe that I remembered from before – I almost went past it, but immediately recognised the location so I just had to stop there. After Summerland there was another nice stretch of riding through Carpinteria after which I would have to join the freeway.

I’ve ridden this route into Ventura before on last year’s trip, so I knew what to expect and savoured the very scenic riding mostly at beachfront. I only had to go on the freeway of 101 for maybe five minutes to reach the fantastic oceanfront bike path around Rincon Point and Island. 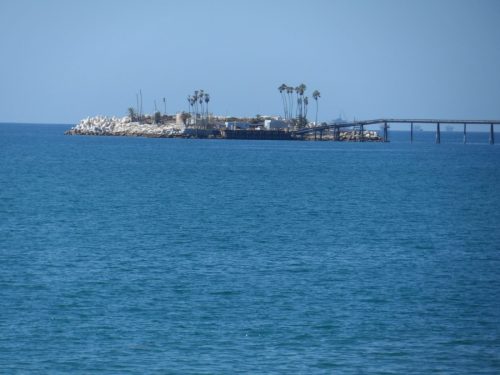 I reached Ventura and stopped for lunch before finding my motel – I’ll be in Ventura for a rest day and to do some very necessary laundry etc. Amazing how all my clothes stink the same after a while! Basil said I have to do something about that – maybe I should throw him in the washing machine too?

I was in no rush to leave the motel in Ventura as I knew that I only had a short ride on flat terrain to Leo Carrillo SP for a camp night. Courtesy of the motel, a hearty breakfast later, I pedalled off into the already warm sun on bike paths followed by wide bike lanes when I would have to join the traffic. The only hiccup was some paving work in Oxnard that would require that I stop every so often to let traffic go by me on a long single lane section. But everyone was very civilised and patient with no honking at me but rather waves of thanks – and not single finger waves!

Oxnard and Port Hueneme were the only two places that I passed through. An ugly power station in Oxnard and a nice marina in Port Hueneme.
After Port Hueneme the streets soon ran out at Port Mugu Naval Base and I would have to rejoin the main highway – SR1. Just before merging onto the highway I passed Missile Park that had a grand display of planes and missiles.

Joining the highway was not really a hardship either today as I rode along with the Santa Monica Mountains on one side and the ocean beaches on the other. For a the short distance today it took a while as I really couldn’t avoid stopping frequently to take in the views and smells of the ocean breeze. I just had to stop at the nice and quiet Thornhill Beach SP to have my lunch and take in the sun and surf. 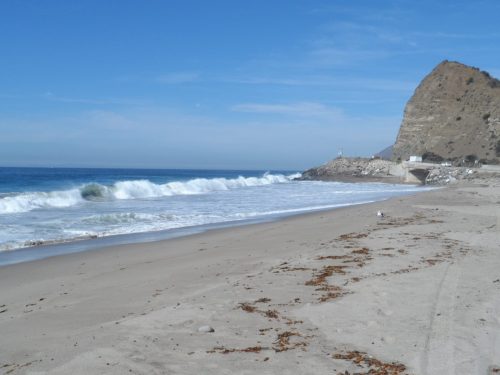 I arrived at the park early and met a young couple who were backpacking around the USA. The fellow was from the Ukraine and the girl from the Czech Republic – Ivan and Alina are spending a month to see as much as possible of the country before returning home.
I wasn’t alone long as a Swiss couple on bikes just pulled in – they are on their way to Chile in South America – impressive!
But wait – another rider just pulled in and what a coincidence, he is Swiss too! He is on his way north to San Francisco to end his tour there after three years on the road! He started in South Africa and rode across there, then too Asia, Indonesia then onto Alaska and rode the Great Divide route all the way south ending up on the coast here on his way home. Basically a very travelled man – his name is Beat and we all had a very nice chat over the shared solitary picnic table at dinner time. Beat has also been to South America and other out-of-the-way places so the Swiss couple had many questions for him. Beat works for three years then tours for three years, he’s a software engineer and has no problem getting a job to fund his next adventure. 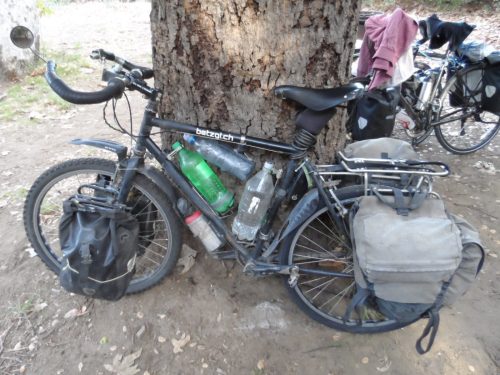 Beat’s Bike after three years on the Road & Trail!

More photos at THIS LINK.

AdamK & (I had to hide while he was looking for laundry – throw me in the machine, not!) Basil.

After a quick breakfast we said our goodbyes at Leo Carrillo and headed out our separate ways. Yesterday the weather was warm, this morning at 8:00 a.m. it was already hot with promise of rising temperatures as the day wore on. the bright sun was in my eyes for the first couple of hours on the way to Malibu where I stopped for a Starbucks fix and to catch up on my emails etc. on their free wi-fi. More fabulous beaches were passed and the surfers were up early vying for a parking spot at the side of the highway. This made my nice wide riding shoulder very small and I had to be really attentive to car doors opening in my path. It was even worse in downtown Malibu where there was a large volume of traffic passing me as I passed parked vehicles – Basil had to keep a sharp eye out the rear and warm me about approaching vehicles that may be too close.

Not much riding Space!

Regardless, there was much to rubberneck at when opportunity knocked and some of the houses along the beachfront were spectacular – albeit jammed close together.

And then there were the cliff side hangers…

And of course the opulent… 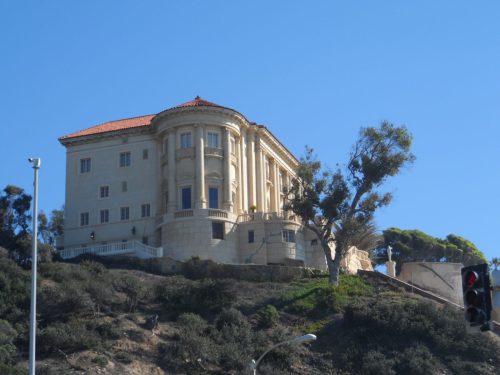 Just before Santa Monica I could escape the highway and ride on bike paths all the way to Redondo Beach. The bike paths are literally paved through the wide sand beaches all the along the coast. In Venice, the only detour from the beach was to go around the massive marinas at Marina Del Ray. But it was an easy detour with any hiccups. 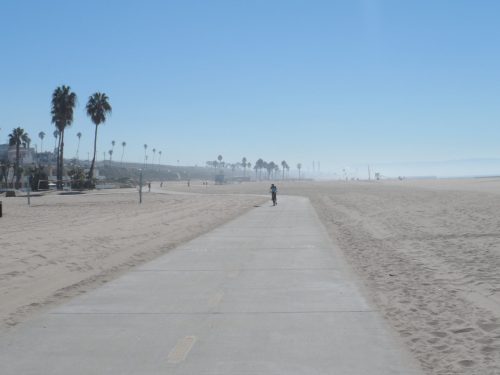 Quiet Bike Paths on the Beach

Finding my motel was easy and thankfully there is air conditioning – did I mention that it was hot today – bloody hot!

Well the rest of LA to ride tomorrow, I hope that the heat and smog don’t get any worse, but I have a feeling that it will so I’ll just have to skeedaddle early and get away from this megalopolis.

More photos at THIS LINK.