Once again, there wasn’t a huge reason to get up too early, so I took my time and after breakfast started out on the return trip via the same route to Powell River. Once in Powell River, I had a quick snack and rode to the ferry dock to wait for the Texada Island ferry. The small ferry runs frequently between Westview and Blubber Bay on Texada, so I didn’t have too long a wait.
The sun was a furnace once again, so the long hill out of Blubber Bay (named for activities that took place when it was a whaling station in the 1800’s) was a hot and sweaty affair! In fact, like most Gulf Islands, the roads on Texada are narrow, hilly and winding – but at least the roads are paved and relatively quiet! So I pedalled out to the village of Gillies Bay, where I bought a picnic lunch at the general store and devoured it forthwith followed by a generous helping of ice-cream and cold drinks. 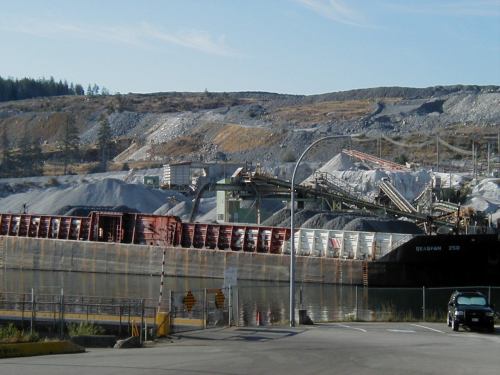 Shelter Point Regional Park a few kilometres past Gillies Bay and was my destination for the day. This is a spectacular park with a nice beach on the west coast of Texada Island and it is usually very busy in the summer months. Because of this, I was unable to snag a site close to the waterfront, but instead was directed about half a kilometre back up the hill to another camping area of the park. I didn’t even know that this portion existed on my last visits here, so I was pleased to see that there were other options when the area “down below” was full. I picked a nice grassy site, set up camp quickly and then walked down to the main area to the shower facilities. After a refreshing shower, I wandered over to the park’s decent food concession, where cold drinks and ice creams are served to parched cyclists – and others!

Texada is the largest of the Gulf Islands in the southern Inside Passage and known locally as the”Rock.” Over the years, once whaling declined, the island has been home to many mining operations (gold, copper, iron) and is still dotted with some large and active limestone quarry operations. It is a popular spot for all types of recreationalists; hikers, kayakers, road/mountain bikers etc. can enjoy this quiet island to the fullest. There are no predators (bears, cougars) on Texada, so if one hears a “bump in the night” while tenting, it’s more that likely one of the thousands of deer that inhabit the island.

Another way to reach the Campground!

After lounging around and cooking up my dinner, I wandered back to the beach for a while. While I was there, a float plane came swooping down to deposit a few people at the beach – that’s the way to get to the park in a hurry, I guess?
I remember thinking at this point of the trip, that the mozzies had been very few and far between – not that I was complaining, mind you, but the last few days had certainly been devoid of the little biting devils. I had no delusions that the status quo would last!

Anyhow, another great sunset was taken in and then off to bed for a read a restful sleep.

In the morning, after I’d cooked up the usual oatmeal and banana followed by coffee, I set off back to Blubber Bay for the ferry once more. On the way, I counted no less than eighteen individual deer, either on the road or very close by. They didn’t even spook too easily either – almost tame, I thought!
After the short ferry ride, I had a bit of a wait in Westview for the next ferry to Comox on Vancouver Island – a second breakfast was in order I figured, so off to the nearest cafe I went. The cooked breakfast – and cafe – were ho-hum – I should have gone back to the Jailhouse Cafe!
Afterwards, I walked the bike down to the ferry staging area to wait the arrival of the boat. It’s just as well that it wasn’t a long wait, as the sun was a real broiler by then, so I cowered in the shade of the small and stuffy waiting room on the jetty avoiding its full rays.

It’s about a ninety minute sail to the Little River Ferry Terminal in Comox, and I stayed in the shade of the inside lounge of the boat for the whole trip. I had planned to ride further on this day, but once off the boat, the heat made me think again, so I opted to stay fairly close by at a familiar campground. It was a short ride to the Kin Beach Park, but when I arrived, it was full. The lady attendant offered to let me camp in the middle of an open field area, but it would have been like camping in the open desert in a midday sun. She mentioned another campground – “up the hill” – as bloody usual! So I set off to find the Tee-Pee Campground; turns out that it wasn’t that much further, and at least they had a vacancy – and cold drinks and ice creams! My site wasn’t great, but beggars can’t be choosers and the rest of the campground amenities were great. The campground is actually part of Comox Airbase and there were some planes to contend with, but nothing like a major airport. What made up for the odd plane overhead was the huge white sand beach area that many of the campers were enjoying, cooling off from the heat of the day – beautiful beach! After setting up camp, I headed down for a dip in the cool water – very refreshing!
Later, I went for a quick ride into the town of Comox for some supplies and upon returning to camp, cooked up another of my one-pot feasts to finish off the day.

I didn’t hang around too long after awakening on this morning – the sun was bright on the horizon again and I wanted to ride while it was still a little cooler. I rode around the outskirts of the town of Comox to Highway 19A in Courtenay, where I stopped for a full breakfast at one of the many local cafes that the town has to offer.
Highway 19A used to be the main route for travellers heading north and south on Southern Vancouver Island. A new multi-lane road was built a little further inland (now designated Highway 19) leaving the coastal 19A for slower traffic. Highway 19A is now a great route for cyclists, as much of the heavy traffic opts for the faster (and much less scenic) inland route. There is a decent shoulder on 19A and much of the ride is bordered by ocean front or blessed with ocean vistas, making this one of my favourite routes.
I rode the highway all the way to Qualicum Beach, where I looked for a place to camp – in vain! So I picked up some supplies and returned up the highway to the tourist information building. There was another touring cyclist there looking for routing information. I struck up a conversation with him and learned that he was from Ontario. He was on the last few days of his tour and had ridden down all the way from Alaska! Wow what a ride that must have been – no wonder his bike and gear looked a little worse for wear! I gave him some tips for his journey south to Victoria and wished him well as he set off.
I myself, returned north on the highway for a few kilometres, where I had passed a couple of campgrounds just before the town. I found a space at Cedar Grove Campground where I secured a nice riverfront site for the night. After dinner I figured on taking a short hike across the highway and down a lane that led to the ocean. About half way down the lane, I began to get attacked by some tiny mosquitoes – very soon there were hundreds of them after me. I didn’t even have any repellent on and was wearing just a t-shirt and shorts – lots of exposed area for the buggers to suck my blood! I should have figured that the lack of mozzies wouldn’t last forever, but I wouldn’t have guessed that they’d be so bad on this lane, when I hadn’t even seen any at the campground which wasn’t that far away. There must have been a swampy area nearby or something – anyhow, I skedaddled out of there, slapping my body liberally for relief! I jumped into the tent when I got back, quickly zipped up the bug screen and saw Basil sitting there comfortably, with a smug look on his face! – Typical! Well, so much for a quiet stroll to the ocean – I should have sent the beaver to scout the area for mozzies first, that would’ve wipe the smile off his face!
There was one more opportunity to venture out to the washroom after that, but amazingly no mozzies were evident at the campground – none that bothered me anyway!…